If you have been diagnosed with Irritable Bowel Syndrome (IBS), then you may realise it is a bit of a non diagnosis, usually accompanied by the words "go away and live with it". What it really means is that the usual tests have not shown up anything physiologically obvious or sinister. The medical profession usually leave it there, and it is up to the patient to look further into it if they wish. Once you do that, there is an array of possible causes of IBS - bacterial dysbiosis of the gut; candida overgrowth in the gut; SIBO - small intestinal bacterial overgrowth; food intolerances (which I looked at two weeks ago in my Newsletter); histamine intolerance ; and medicines that cause IBS.

Today I am going to take a closer look at histamine intolerance, which has a history of being under diagnosed, and may be the reason your IBS or Gluten Intolerance does not go away.

If you have IBS or Gluten sensitivity could your problem really be Histamine Intolerance?

Interest in Histamine Intolerance is currently on the rise. The first thing that I would say is that I think the term “histamine intolerance” is an improper phrase. It can be very misleading because it is definitely not an intolerance to histamine. It is not an allergy or an autoimmune response against histamine (even if it sounds like it). A more appropriate phrase is ‘histamine intoxication or overload’, and can happen due to the intake of histamine from foods, and is mainly caused by a deficiency of the DAO (diamine oxidase) enzyme in the intestine.

There is clear data indicating that histamine from foods can be absorbed, and can cause troubling symptoms, which we will look at in more detail later on.

Genetically, around 25 Single Nucleotide Polymorphisms (SNPs) have been identified in the gene encoding the DAO enzyme related to lower enzyme activity. This indicates that those with genetic susceptibility could have lower levels of DAO, and therefore more problems dealing with the histamines found in various foods.

drugs have also been identified as possible causes of DAO deficiency. This intolerance manifests

through a plethora of nonspecific gastrointestinal and extraintestinal symptoms.

Furthermore, histamine intolerance has a history of being under diagnosed, mainly because many of the symptoms that come with histamine intolerance are vague and numerous, what we call polysymptomatic. Once identified though,  clinical management is carried out mainly through the follow-up of a low-histamine diet, although there is no definitive consensus on the list of foods to be excluded.

Another effective treatment is oral supplementation with DAO enzymes such as Histamine Block to enhance the intestinal capacity to degrade dietary histamine.

What Are The Specific Symptoms? 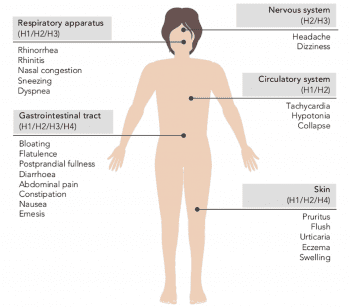 When we think of symptoms involved with this overload of histamine, we primarily look at some of the classic “allergy” symptoms. These include:

These are classic symptoms. You could take any one person, give them a mega dose of histamine, and they will start developing them.

It is not that people are “intolerant” of histamine, instead they simply have too much of it circulating throughout their body.

What Are The Vague Symptoms?

A lot of the following vague symptoms can be due to chronic, elevated levels of histamine.

This is where things get murky, but here is what one could expect:

These are all possible symptoms that can be associated with histamine intolerance. It does not mean that they are definitely going to happen – only a possibility.

Why Would Someone Have Too Much Histamine?

This goes back to the idea that histamine intolerance is less of being intolerant, and more of having an overload. How would someone end up with more histamine than they need?

Think about it like this: your body has histamine coming in, and histamine going out. These are the main two things that your body is in charge of.

From there, two issues can arise: too much coming in or too little coming out. There would have to be a deficiency on one end and that typically starts with the amount taken. The diagram below shows how this can happen. 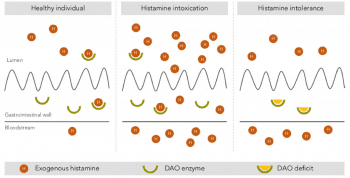 When we think about histamine, we can understand it as a natural response to:

Histamine leaves your body by way of various enzymes in your body, primarily DAO, that are in charge of breaking down histamine in your body.

Histamine is known as a biogenic amine, which means that it triggers an inflammatory response in your body to make this happen.

The problem is that you could easily have too many of these being made, and not enough being unloaded. The former is more likely, and the latter (due to gene defects) is quite rare.

A DAO deficiency is what we might understand as the result of a gene defect which makes it difficult for your body to “unload” histamine from your body. DAO (diamine oxidase) is an enzyme in the body that breaks down histamine. Some people do not produce enough of this enzyme; similar to those with lactose intolerance who do not produce enough of the lactase enzyme. This is what may cause histamine overload, triggering those nasty symptoms previously mentioned.

How do you diagnose histamine intolerance?

There are two easy ways to diagnose histamine overload empirically.

1. You take histamine blockers, and if you feel better, it is not unreasonable to think that histamine intolerance was the root of the problem.

2. You can adopt a low histamine diet, and again if you feel better, it is not unreasonable to think that histamine intolerance was the root of the problem.

Some trends have emerged about foods that are higher in histamines. Foods that potentially contain high levels of histamine are:

a) those foods microbiologically altered, such as fish and meat, or derived products that may have been preserved or processed in hygienically unsuitable conditions; and

b) fermented products, in which the bacteria responsible for the fermentation process may also have aminogenic capacity:

A low-histamine or histamine-free diet has been proposed as the main strategy for the preventive
treatment of histamine intolerance. These diets exclude a number of foods that patients associate with the onset of symptoms, primarily those that may contain high levels of histamine. However, there is no single dietary recommendation of a low-histamine diet. As it may be seen in the table below, there is no coincidence in all the foods excluded in the different low-histamine diets found in the literature.

These are categories of food that have been known to be higher in histamines.

Medications that cause Histamine overload

It has been estimated that approximately 20% of the European population regularly take DAO-inhibiting drugs, which significantly increases the number of people susceptible to the adverse effects of dietary histamine. Here are some of the most common problematic active ingredients, alongside the class of drug that they are.

Only the active ingredients are listed, not the brand names, so if you are taking medications, it is a good idea to have a look and see if they are likely to make a histamine problem worse. The drugs tend to interfere with enzymatic activity of DAO, leading to overload of histamine in the body. If you take these drugs, and have some food intolerance issues, it may well be worth speaking to a Naturopath or Nutritionist to look for ways of reducing your Histamine overload. 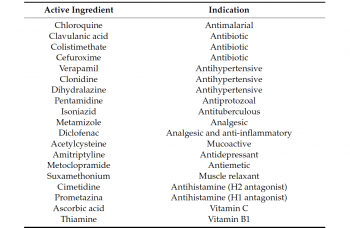 Currently, approximately 20% of the population are avoiding gluten in food because of a self-diagnosed, new clinical condition, referred to as non-coeliac gluten sensitivity (NCGS), or  non-coeliac wheat sensitivity has been suggested as a more accurate definition.

Widely used gluten-containing bakery goods and beers are prepared with histamine-producing yeast. Additionally, foods like pasta, pizza, and bulgur are very commonly consumed with histamine-containing tomatoes and seasonings. Furthermore, it has been noted that in NCGS the GI and extra-intestinal symptoms resemble those found in Histamine intolerance.

Generally, several gluten-free foods are low in histamine and an increasing number of gluten-free products, including breads, are already labeled gluten-free and yeast-leavened.  The reduction of gluten-containing food and drinks cuts the quantity of parallel consumed histamine. This may help to explain the current extraordinary popularity of gluten-free food.

Finally, the pathophysiology of these symptom-oriented disorders is unknown and histamine overload, with its plethora of symptoms, may well play a role. So, try Histamine Block, or adopt a low histamine diet for three weeks and see how your symptoms improve!